24th August 2018 Frankie Dettori and John Gosden celebrate the incredible win in the Hamilton Lonsdale Cup with Stradivarius. Resulting in winning the four-race sequence in York to net prize money of £1 million.

Trainer John Gosden told ITV Sport: “He got here and did it in a race that probably wasn’t run to suit, but at the same time it’s a phenomenal achievement.”

Highlight of Royal Ascot week was Stradivarius winning a first Gold Cup for John Gosden, and Frankie Dettori’s sixth.
This was Frankie’s sixtieth winner at the meeting. John Gosden had three other winners at the Royal meeting. 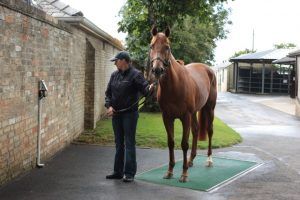 The weighing platform, a Kentucky, at John Gosden’s Clarehaven Stables, is situated within easy reach of all the yards, so that regular weighing is part of a horse’s life.