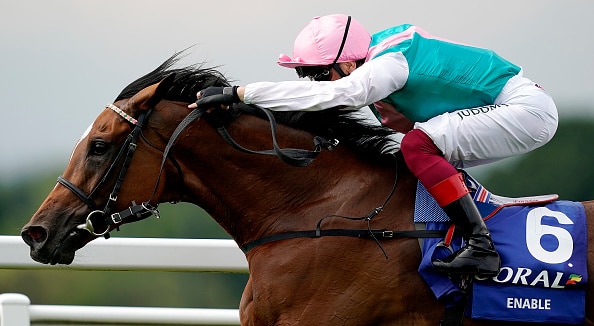 Enable makes history winning the King George at Ascot for the second time!

27th July 2019 the incredible duo Frankie Dettori and Enable put up a fight to take the crown at Ascot in The King George VI and Queen Elizabeth Stakes against revel Crystal Ocean and James Doyle.

The 8-15 favourite, ridden by Frankie Dettori for trainer John Gosden, went head to head with the runner-up for two furlongs of a classic racing battle.

“She’s brilliant. The second [Crystal Ocean] is a great horse, I knew he was the one to beat. We gave the public what they came to see, and they got a fantastic horse race.” Frankie Dettori

Enable triumphed and remains on target for an unrivalled third success in Europe’s richest race, the Prix de l’Arc de Triomphe at Longchamp, in October.

Enable gained her 10th consecutive victory as she won the Coral-Eclipse Stakes at Sandown. Ridden by the unstoppable jockey Frankie Dettori, this was Enable’s seasonal return.

The 4-6 favourite is trained by the incredible John Gosden, a very loyal Horse Weigh Client. It was an exciting race with the whole crowd at Sandown behind the flying filly.

Enable will be focused on the Prix de l’Arc de Triomphe in October to contend for a record third victory. Gosden confirming this goal for the 5 year old fily, who will most likely be running in the King George VI and Queen Elizabeth Stakes at Ascot later this month.

“She is the queen of racing,” said Dettori before a flying dismount.

“She was only about 85% or 90%,” said the Newmarket trainer. “To come from an eight-month lay-off and win an Eclipse is quite an ask. She is an exceptional athlete.”

The exceptional mare became only the third of her sex to win the mile-and-a-quarter race, after Pebbles (1985) and Kooyonga (1992) – and did it in pure style as she gained her eighth Group One victory.

Monitoring Enables weight during training and in preperation for her return to the track plays an important role in her success. John Gosden and Frankie Dettori are loyal users of our Horse Weighing platforms.